In 1970, a group of "hard hats" or structural iron workers got into a battle with anti-war student protestors in lower Manhattan.

New York has some ugly riots in its history.

One of the strangest is the Hard Hat Riot, a clash between construction workers and war protesters in May 1970.

The spark was the Kent State University shootings. After the deaths of four students at the hands of National Guardsmen there, antiwar protesters here announced a rally memorializing the dead at City Hall.

Early on May 8, hundreds of peace activists gathered at Wall and Broad Streets. After their numbers swelled to about a thousand, they marched to the steps of Federal Hall and demanded the U.S. get out of Vietnam. 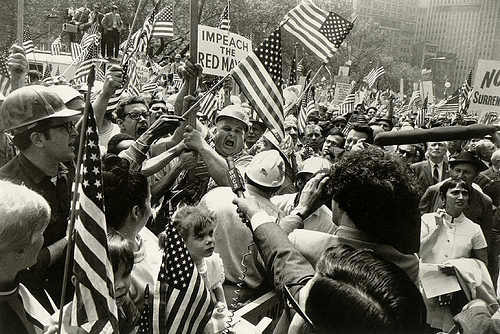 That’s when about 200 workers, carrying American flags and pro-USA signs, approached the protesters. Police reportedly did nothing as the hard hats chased protesters and beat them with their helmets for an hour.

“The workers then stormed City Hall, cowing policemen and forcing officials to raise the American flag to full staff from half staff, where it had been placed in mourning for the four students killed at Kent State University on Monday,” wrote The New York Times.

An estimated 70 people were injured, and six were arrested. Mayor Lindsay slammed the police for not stopping the rioters.

This earned the wrath of union leaders, who said the riot was a spontaneous act by workers who were tired of antiwar activists criticizing their country . . . an explanation disputed by some witnesses, who claimed to see two men in suits directing the rioters with hand motions. 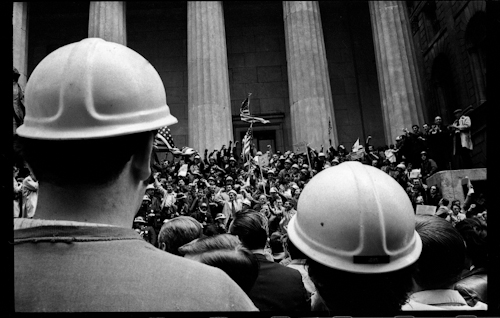