Brooklyn College Alumnus Alan Dershowitz debated Rabbi Meir Kahane in 1985 on the issue of Israel. The two attended the same Yeshiva High School in Brooklyn, and both attended Brooklyn College. 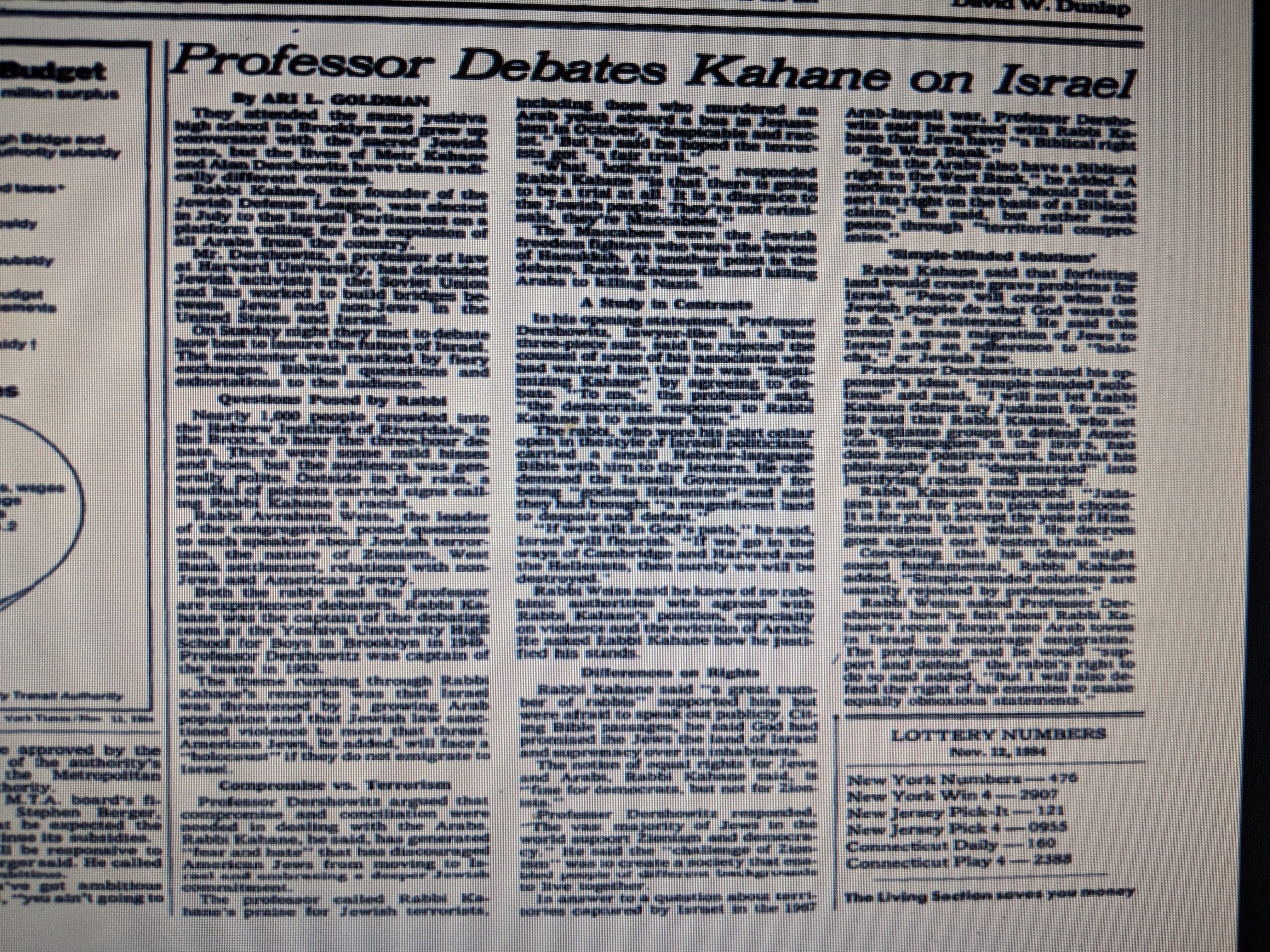 (From The New York Times November 13, 1984)
They attended the same yeshiva high school in Brooklyn and grew up conversant with the sacred Jewish texts, but the lives of Meir Kahane and Alan Dershowitz have taken radically different courses.

Rabbi Kahane, the founder of the Jewish Defense League, was elected in July to the Israeli Parliament on a platform calling for the expulsion of all Arabs from the country.

Mr. Dershowitz, a professor of law at Harvard University, has defended Jewish activists in the Soviet Union and has worked to build bridges between Jews and non-Jews in the United States and Israel.

On Sunday night they met to debate how best to insure the future of Israel. The encounter was marked by fiery exchanges, Biblical quotations and exhortations to the audience.

Nearly 1,000 people crowded into the Hebrew Institute of Riverdale, in the Bronx, to hear the three-hour debate. There were some mild hisses and boos, but the audience was generally polite. Outside in the rain, a handful of pickets carried signs calling Rabbi Kahane a racist.

Rabbi Avraham Weiss, the leader of the congregation, posed questions to each speaker about Jewish terrorism, the nature of Zionism, West Bank settlement, relations with non- Jews and American Jewry.

Both the rabbi and the professor are experienced debaters. Rabbi Kahane was the captain of the debating team at the Yeshiva University High School for Boys in Brooklyn in 1949. Professor Dershowitz was captain of the team in 1953.

The theme running through Rabbi Kahane's remarks was that Israel was threatened by a growing Arab population and that Jewish law sanctioned violence to meet that threat. American Jews, he added, will face a ''holocaust'' if they do not emigrate to Israel. Compromise vs. Terrorism

Professor Dershowitz argued that compromise and conciliation were needed in dealing with the Arabs. Rabbi Kahane, he said, has generated ''fear and hate'' that has discouraged American Jews from moving to Israel and embracing a deeper Jewish commitment.

The professor called Rabbi Kahane's praise for Jewish terrorists, including those who murdered an Arab youth aboard a bus in Jerusalem in October, ''despicable and racist.'' But he said he hoped the terrorists got ''a fair trial.''

''What bothers me,'' responded Rabbi Kahane ''is that there is going to be a trial at all. It is a disgrace to the Jewish people. They're not criminals, they're Maccabees.''

The Maccabees were the Jewish freedom fighters who were the heroes of Hanukkah. At another point in the debate, Rabbi Kahane likened killing Arabs to killing Nazis. A Study in Contrasts

In his opening statement, Professor Dershowitz, lawyer-like in a blue three-piece suit, said he rejected the counsel of some of his associates who had warned him that he was ''legitimizing Kahane'' by agreeing to debate. ''To me,'' the professor said, ''the democratic response to Rabbi Kahane is to answer him.''

The rabbi, who wore his shirt collar open in the style of Israeli politicians, carried a small Hebrew-language Bible with him to the lecturn. He condemned the Israeli Government for being ''godless Hellenists'' and said they had brought ''a magnificent land to despair and defeat.''

''If we walk in God's path,'' he said, Israel will flourish. ''If we go in the ways of Cambridge and Harvard and the Hellenists, then surely we will be destroyed.''

Rabbi Weiss said he knew of no rabbinic authorities who agreed with Rabbi Kahane's position, especially on violence and the eviction of Arabs. He asked Rabbi Kahane how he justified his stands. Differences on Rights

Rabbi Kahane said ''a great number of rabbis'' supported him but were afraid to speak out publicly. Citing Bible passages, he said God had promised the Jews the land of Israel and supremacy over its inhabitants.

The notion of equal rights for Jews and Arabs, Rabbi Kahane said, is ''fine for democrats, but not for Zionists.''

Professor Dershowitz responded, ''The vast majority of Jews in the world support Zionism and democracy.'' He said the ''challenge of Zionism'' was to create a society that enabled people of different backgrounds to live together.

In answer to a question about territories captured by Israel in the 1967 Arab-Israeli war, Professor Dershowitz said he agreed with Rabbi Kahane that Jews have ''a Biblical right to the West Bank.''

''But the Arabs also have a Biblical right to the West Bank,'' he added. A modern Jewish state ''should not assert its right on the basis of a Biblical claim,'' he said, but rather seek peace through ''territorial compromise.'' 'Simple-Minded Solutions'

Rabbi Kahane said that forfeiting land would create grave problems for Israel. ''Peace will come when the Jewish people do what God wants us to do,'' he reiterated. He said this meant a mass migration of Jews to Israel and an adherence to ''halacha,'' or Jewish law.

Professor Dershowitz called his opponent's ideas ''simple-minded solutions'' and said, ''I will not let Rabbi Kahane define my Judaism for me.'' He said that Rabbi Kahane, who set up vigilante groups to defend American synagogues in the 1970's, had done some positive work, but that his philosophy had ''degenerated'' into justifying racism and murder.

Rabbi Kahane responded: ''Judaism is not for you to pick and choose. It is for you to accept the yoke of Him. Sometimes that which He decrees goes against our Western brain.''

Rabbi Weiss asked Professor Dershowitz how he felt about Rabbi Kahane's recent forays into Arab towns in Israel to encourage emigration. The professsor said he would ''support and defend'' the rabbi's right to do so and added, ''But I will also defend the right of his enemies to make equally obnoxious statements.''